At the end of the general meeting Jochen Grönegräs, general manager of the BF Bundesverband Flachglas e. V., gave a lecture entitled "Quality development in glass - experience of a quality association".

PIV celebrates inauguration
The Testing Institute Locks and Hardware, which belongs to the Quality Assurance Association Locks and Hardware, inaugurated its new hall during the annual general meeting. After speeches by managing director Stephan Schmidt and chairman Richard Rackl (CES Group) the hall was officially opened. Afterwards the guests could look forward to a colourful supporting programme with music and interludes by a comedian.

Due to the good order situation PIV has been able to increase its team in the past years and now employs a total of twelve people. Therefore the location at Wallstraße was optimized and an old hall was replaced by a new building. The new building now has one floor more, so that PIV has gained about 200 square meters more space. From now on, the offices are located here and the previous offices are available for further test stands. Due to the new building the lower floor of the building has also been optimized and therefore offers even more space for the test stands. 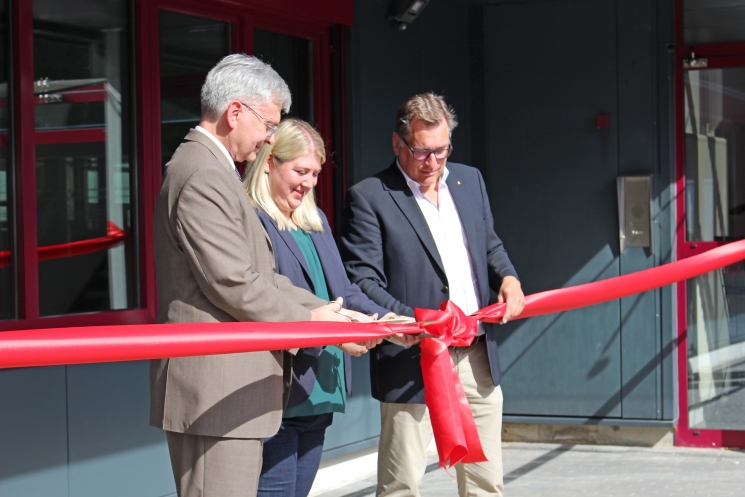 Stephan Schmidt (3rd from left), managing director of the Quality Assurance Association, and the institute director Andrea Horsthemke (2nd from left) opened the new hall together with the chairman Richard Rackl (1st from left).